Jamie Waese
Growing Moe is the twenty-second episode of the first season of The Doodlebops.

After the Doodlebops perform the pledge, Mazz comes in. She wants a jar off a high shelf, so Moe opted to help her. But, Moe couldn't even reach the high shelf, so Rooney reached it for him. Then, Moe tries to open the jar but he wasn't strong enough, so Deedee opened it for him. Mazz gets out a kazoo and plays it because she was making an announcement, so the three decide to play dress up. When Moe dressed in a red jacket he wanted to wear, Mazz says that the jacket is too big, but Moe says he is too small. Then, an elephant was walking outside Doodlebop Central and Deedee, Rooney and Mazz saw it. Moe couldn't because he is small. Because of this, he feels disappointed. As Moe starts to sing You're Gonna Grow Up, the other Doodlebops remind him that he'll grow one day. Moe proceeds to sing, even taking his red coat off at one point, then he puts his vest on. They decide to go outside.

Outside, Moe pretends to be tall by wearing high heels, dinosaur pants, and a long coat, but failed to do so (Moe was about to fall in the shoes, he played with a miniature dollhouse with some small kids, and some other kids revealed him standing on a trashcan).

On the bus, Bus Driver Bob shows Moe a photograph of him in front of the bus when he was a kid, and reminds him that "everybody starts out small". Rooney told him that he was smaller than his guitar and Deedee told him that she couldn't get down from the chair near her vanity without help. Bob then tells the three that he always wanted to be a bus driver, but he had to grow in order to do so. Outside the venue, Moe finds a small baby.

Backstage, Deedee and Rooney cannot find Moe again. He popped out and says that he is small, not only realizing that he'll grow, but while he waits patiently to grow, he can still hide in small places.

To view the full gallery for this episode, go to Growing Moe/Gallery. 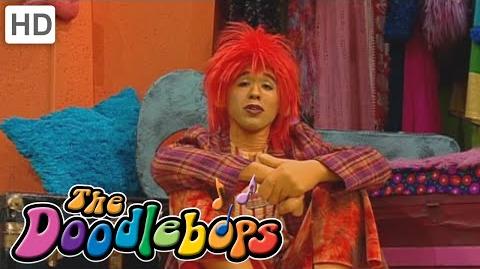 Retrieved from "https://doodlebops.fandom.com/wiki/Growing_Moe?oldid=3136"
Community content is available under CC-BY-SA unless otherwise noted.