The Doodlebop Holiday Show, also known as A Happy Doodle Holiday in the title card, is the first episode of season 2 of The Doodlebops, and the twenty-seventh episode overall.

Deedee, Rooney and Moe decorate the clubhouse with Christmas, Hanukkah and Kwanzaa decorations for the aforementioned three holiday traditions. Jazzmin arrives with a basket of corn to give to the Doodlebops to put in the Kwanzaa pile. The Doodles come up with a brand new song called It's A Happy Holiday.

The Doodlebops headed for the recording studio, where they meet Audio Murphy and recorded the song with a brand new dance called the Down Hill Skier. Murphy explains that it is the best holiday tradition.

On the bus, Bus Driver Bob shows the Doodlebops a brand new effect: Santa Claus' sleigh. Deedee explains that she wishes it would be fun to celebrate a holiday together. They went to the concert in time to see a big surprise: Kids are going to sing with them at the concert, too. It was a huge holiday success at the concert. 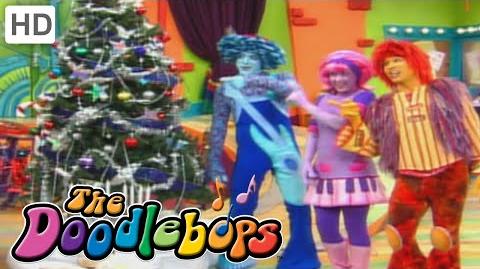 Retrieved from "https://doodlebops.fandom.com/wiki/The_Doodlebop_Holiday_Show?oldid=3859"
Community content is available under CC-BY-SA unless otherwise noted.